The BNN processor can be used to forecast a ratio-scaled variable based on a neural network which is built using the differential evolution (DE) algorithm in several iterations.

The BNN processor builds several neural networks in several iterations (depending on the configuration settings) and evaluates whether the fitness of all neural networks after each iteration has improved in comparison to the networks of the previous iteration.

The fitness in each iteration is calculated based on the prediction error across all rows and the complexity of the neural network. A more complex network leads to a worse fitness. This means the processor tries to build a very simple network with a low prediction error.

Dependent Column: Select a ratio-scaled dependent column which values should be forecasted.

Independents: Select all the independent columns that should be used as explanatory variables for forecasting.

Forecast: Enter a name for the column of the output dataset that will contain the forecast values.

Hidden Nodes: Enter the number of hidden nodes that should be included in the hidden layer of the built neural networks.

A cooling factor of 0.9 is recommended.

A high initial temperature and a low cooling factor lead to a model that cools down very slowly and thus the random component influencing the mutation of the networks has a higher influence in this case.

An initial temperature of 10000 is recommended.

A high initial temperature and a low cooling factor lead to a model that cools down very slowly and thus the random component influencing the mutation of the networks has a higher influence in this case.

Burn-In Iterations: Enter the number of burn-in iterations the algorithm should take. In the burn-in phase the evolution of the neural networks based on the random mutations takes place and the algorithm tries to find a suitable model. Ideally the fitness of the model should not change much at the end of the burn-in period. This can be checked using the second output node of the processor which shows the calculated fitness of the model in each iteration.

A special case is represented if the sample count 1 is chosen, then the best model of each generation is chosen.

Standard Deviation Gamma: Enter a standard deviation gamma value. This value refers to the standard deviation that is the basis for the random sampling of the weights of the edges connecting the hidden and the output layer nodes.

Lambda: Enter a value for lambda. Lambda determines the weight of the penalty that is introduced for the network complexity. A higher value leads to a simpler neural network.

The entered value must be positive.

The right output node returns the debug information of the fitness of the models built in each iteration. It can be used to inspect how the fitness improved in the different iterations and thereby modify some of the configuration parameters.

In this example we generated an artificial dataset and used the BNN Processor to forecast one column of the dataset. 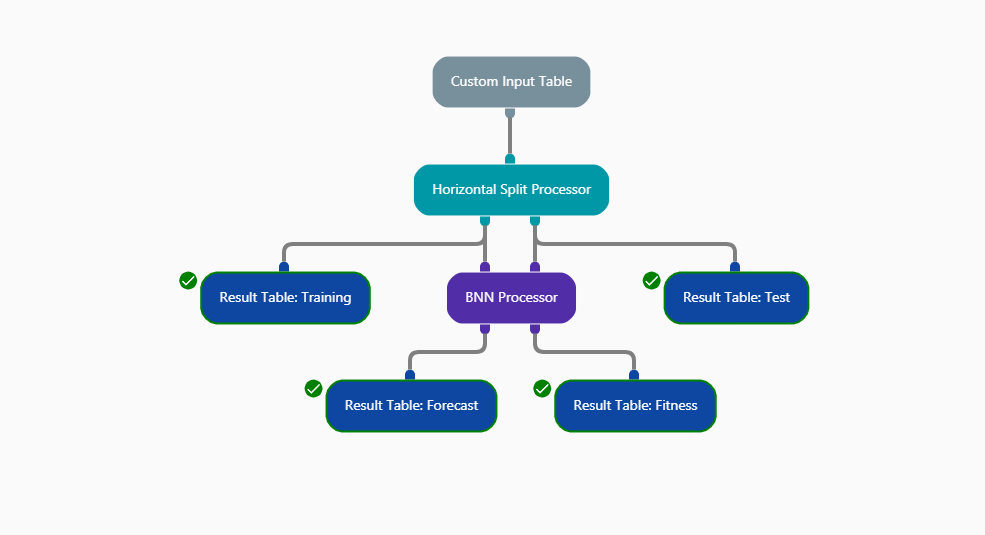 The Custom Input Table Processor was used to generate the artificial dataset. 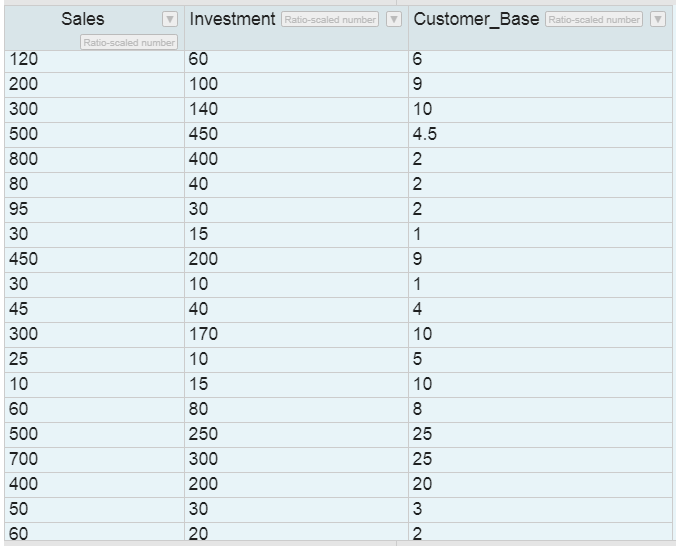 The configuration of the BNN processor for this example is given below. Most default configurations were left unchanged. We selected the "Sales" column as dependent column that should be predicted and the "Customer_Base" and "Investment" columns as independent columns used for prediction.

The BNN processor returns two result which can be inspected using the Result Table Processors.

The left output node returns the forecast for the test dataset.

The result of the altering fitness of the example above can be seen in the attachment "exampleoutput2.gif".