Since R-Scripts are a very useful tool for data science tasks, it is possible to include them in ONE DATA workflows with the R-Script processors. In this article, we will focus on the R-Script Dual Input Processor.

The R-Script Dual Input Processor executes an R-Script on the input datasets. An overview on how R-Scripts are processed in ONE DATA and useful tips on how to install R packages can be found here.

The processor can operate on any valid dataset produced by ONE DATA. It has two input nodes which may be connected to two different datasets that should be processed.
Column names in the input dataset should not contain any special characters or consist only of numbers. Otherwise ONE DATA will not recognize it.

In the upper textfields, it is possible to specify the name of the input datasets in the R-Script. The default values are "input1" and "input2". The datasets can be saved into R dataframes using:

With this configuration option it is possible to specify what scale and representation type the output columns have, in order to provide the correct type inference in ONE DATA.

If it is not possible to convert the values of a column to the specified representation type, the processor will take the type that fits best for their representation. If these still do not fit the purpose, it is recommended to use the Data type Conversion Processor.

The output of the R-Script Processor is the dataset that was produced by the script in the configuration. There are two things to note on how the output has to be specified:

In this example we used the R-Script Dual Input processor to filter observations that exist in the first input dataset A by values of a second input dataset B in ONE DATA. The input datasets were generated using a Custom Input Table processor. 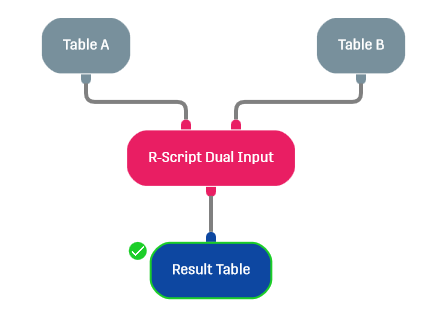 The example script filters table A by the values of table B:

We name the left input "tableA" and the second one "tableB".

For the other configuration options we choose the defaults, so timeout 300 seconds and no Manual TI configuration.