Since R-Scripts are a very useful tool for data science tasks it is possible to include them in ONE DATA workflows with the R-Script processors. In this article, we will focus on the R-Script Data Generator Processor.

The R-Script Data Generator Processor can execute an R-Script that produces data. An overview on how R-Scripts are processed in ONE DATA and useful tips on how to install R packages can be found here.

The processor has no input node, it just takes the R-Script in the configuration.

Define the R-Script to execute here. The script must have a return() statement, which contains the produced data that is returned to the output node.

The output of the R-Script Processor is the dataset that was produced within the R-Script. There are two things to note on how the output has to be specified: 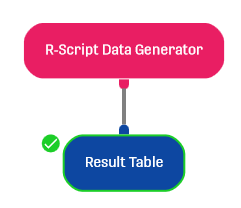 In this example we use the R-Script Data Generator processor to produce a dataset that contains two columns with four rows that have randomly chosen uniformly distributed values. As timeout we select the default value and add no Manual TI configuration.
The R-Script that was entered in the processor is given below.