Since Python scripts are a very useful tool, it is possible to include them in Workflows with the ONE DATA Python Processors. In this article, the one we are focusing on is the Python Script Data Generator Processor.

With the Python Script Data Generator Processor it is possible to generate data, either datasets or graphs and plots with a custom Python script. There are already some important libraries included, that could be necessary to write scripts for data science tasks. For further information on what packages are preinstalled, check the info on the left corner of the input box.

To interact with ONE DATA resources from within the Python script, for example loading Models, accessing variables or specifying the output of the Processor, it is necessary to use the ONE DATA Python Framework.

The Processor takes Python code as input, that can be inserted in the top part of the configuration. When a new Python Script Data Generator is created, the "Python Script" field already contains some sample code, that provides basic code for creating a new dataset and its corresponding plot.

The Processor configuration gives some additional options on how the output data should be processed and some definitions for the script execution itself. It is also possible to load ONE DATA  Python Models and use them in the script. All options are described more in-depth in the following sections.

This option defines if the Processor should generate an empty dataset after the execution of the script. This can be very useful, for example when the script is only used to generate a plot and no respective result dataset. This option can then be activated to prevent a Processor execution error, because by default, the Processor requires an output dataset.

With the "Open Model" button you can access the Model view for the selected one directly from the Processor.

The Python Script Data Generator Processor has several output types that can be defined within the script.

For an example of how to use this together with the Processor output, look here.

In this example we want to generate a dataset that holds values for a specific timestamp, and also plot of the results as bar chart.

Within the script we have a for loop that takes every value of "example_values_y", doubles it and then saves the result to a new list. Additionaly it saves the timestamp of the computation to a list.

Then we create a Pandas dataframe from the three lists, and then use it to generate a simple bar chart.

In the end, we save the chart as JPG image and define the dataframe as output of the Processor. 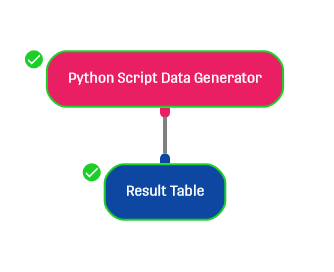 In this example configuration we use the default timeout and we specify the types just for the "y" column. We won't load or save Models.

And our Result Table looks as follows

This example uses the JWT and writes the username into a new dataset. 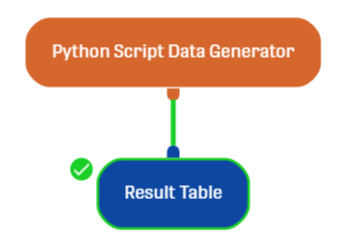 The Result Table shows the username that got extracted from the received request answer.