Since Python scripts are a very useful tool, it is possible to include them in Workflows using ONE DATA Python Processors. In this article, the focus will be on the Python Script Single Input Processor.

The Python Script Single Input Processor takes a given input dataset and executes the specified script on it. Then the processed data can be passed as output to other Processors. There are already some useful libraries included that could be necessary to write scripts for data science tasks. The info button on the left corner of the input box provides further information on what packages are preinstalled.

To interact with ONE DATA resources from within the Python script, for loading Models, accessing Variables or specifying the output of the Processor, it is necessary to use the ONE DATA Python Framework.

The Processor takes two valid datasets as input. The Python script which is used to process the input data can be inserted within the configuration:

In the "Input Name In Script" textfields, it is possible to specify the names of the input datasets in the Python script. The default values are "input1" and "input2".

Then the inputs can be saved into variables, for example as Pandas Dataframe:

The Processor configuration gives some additional options on how the output data should be processed, along with some definitions for the script execution itself. It is also possible to load ONE DATA Python Models and use them in the script. All options are described more in-depth in the following sections.

This is the time in seconds that ONE DATA waits for the script execution and the returning of the results of the script. The time starts when the Processor submits the Python script and the data to the Python Service of ONE DATA. If the timeout is exceeds, the calculation will be interrupted and a Processor execution error is thrown.

This option defines if the Processor should generate an empty dataset after the execution of the script. This can be very useful when the script is only used to generate a plot and no respective result dataset. This option can then be toggled to prevent a Processor execution error, since by default, it requires an output dataset.

If it is not possible to convert the values of a column to the specified representation type, the Processor will take the type that fits best for its representation. If types still do not fit the purpose, it is recommended to use the Data type Conversion Processor.

The first dropdown is used to select an existing Python Model from the current project. It's also possible to specify which version of the Model should be loaded.

A Model can be saved using following script:

The Python Script Dual Input Processor has several output types that can be defined within the script.

Datasets can have the following formats:

It is also possible to save plots and graphs generated within the script (for example using Pandas) as image to the "Image List" of the Processor. This can be done using the following method:

The Processor also has a log view, where logs produced with the "print()" statement can be viewed. It can be accessed by the clicking "Log content" on the left hand side toolbar.

In this example, we have two input tables with simple numeric numbers. We compare each row of the dataset to the other and save the bigger number to the result list. Also at the beginning of the script, we print both datasets to the log. 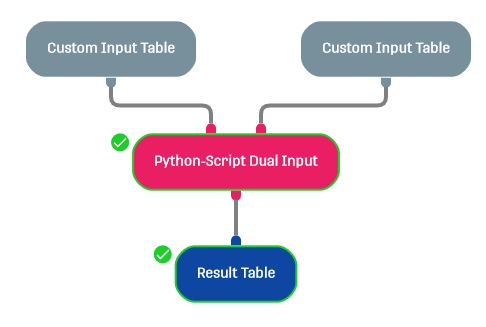 For the left input dataset, the name "left" and for the right one, "right" is used. 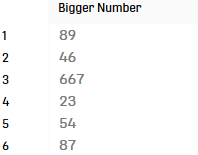