The Grouped Decision Tree Processor is used to divide the input into different groups, each of which is used to train a decision tree and generate a forecast.

This processor has two input nodes:

The configuration of the processor can be applied as follows:

Define the independent columns for the creation of the decision tree models.

Name Of The Forecast Column

Name that should be used for the forecast column in the output. It has to be different from all existing column names in the forecast dataset. It also must not include whitespaces.

The default value is "Forecast".

Select the Column to group by. A decision tree model will be computed for every group.

Maximal Number Of Leafs In The Decision Trees

Select the maximal number of leafs the computed decision trees may have.

The default value is 6.

The number of data partitions the training input should be arranged in. If set, data is re-arranged trough re-partitioning by the rows' hash values before performing 'group by' operation. (Can improve performance)

The number of data partitions the forecast input should be arranged in. If set, data is re-arranged trough re-partitioning by the rows' hash values before performing 'group by' operation. Can improve performance.

This processor returns the input Dataset along with an additional column containing the forecast values.

In this example, the Grouped Decision Tree Processor will be applied on the Iris Dataset to study the relation of a flower petal length (dependent column) and its petal width, sepal length and sepal width (independent columns) within each flower category (the group by column). 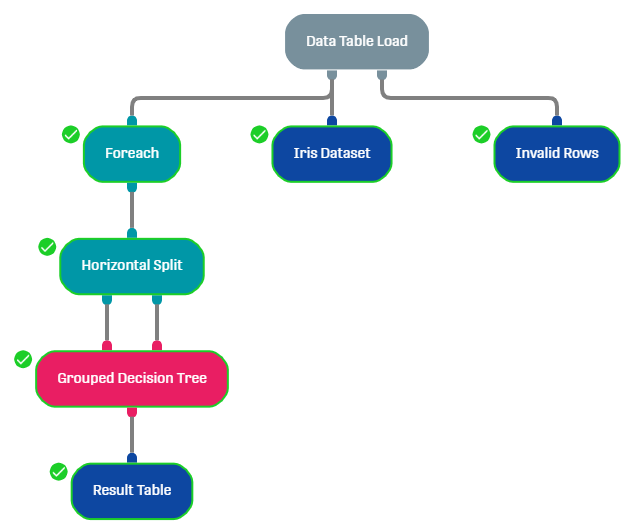 The Foreach Processor will be used to split the Dataset with respect to entries of "variety" column (this column will be also used as grouping column in the Grouped Decision Tree Processor).

The Horizontal Split will divide the input Data into training (80%) and test (20%) sets.

The Result Table Processor can be used to visualize the outputs. 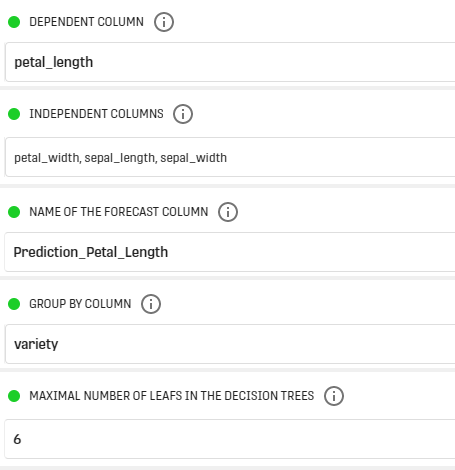