The Lag Generation Processor creates a lag on a selected column based on a time interval. The generation of lags is often necessary for time series analyses (e.g., ARMA or ARIMA models).

Column for which the lag / lead values should be generated. This column may have any type, no restrictions apply here.

When set, the column selected in "Sorting column" is only used for sorting the input data before lag / lead generation and does not need to be a datetime column, but can be any sortable column.

If no sorting column is given, we assume the input data is already ordered. Each lag / lead is directly referring to its preceding / succeeding row(s).

This configuration option can be used in three different ways:

The time interval which should be used for lag / lead generation, if it is not row-based. This interval can be further customized by choosing a multiplicator in the next config option.

The default value for this option is 1.

Define the amount of lags / leads to create.

Which kind of extrapolation should be done:

Column, which is used for grouping the data before creating lags / leads of it. Lag / Lead generation will be done for each group separately. A group is defined as a distinct combination of values present in the selected columns. Selecting a value here implicitly makes it mandatory to select a column in "Sorting column".

The dataset containing new columns with the leading/lagged observations.

In this example we want to apply a lag to a dataset.

As input we use a small sample dataset (24 rows) that contains a timestamp, a character and a corresponding number in each row. Here is a snippet of it:

The whole dataset is attached at the the end of the article.

In this workflow we use a Data Table Load Processor to load the dataset, then we convert the strings in the "Time" Column to actual datetime values with a Data Type Conversion Processor. The output of the conversion is passed to a Result Table and to the Lag / Lead Processor, which creates the lag and then saves it again to a Result Table. 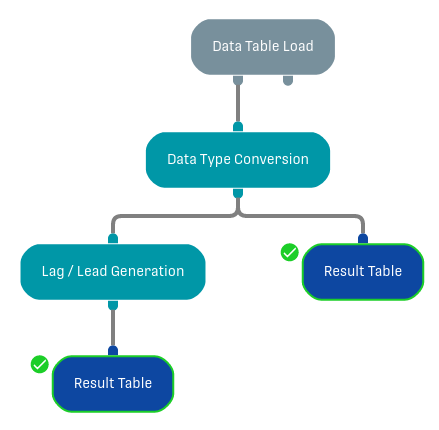 The example configuration has the following settings:

For the remaining options the default value is used.