The Versioning Processor appends versioning information to an input dataset (version number and date and time on which the version was created). It may be used if new data is appended to an existing dataset and a version information should be added or if a forecast is calculated at different points in time and the different forecast versions should be compared.

The output of the Versioning Processor is the same dataset as the new input dataset that was connected to the left input node. But it has two additional columns containing the version number (maximum version number from right input plus one) and the datetime of the creation of the version.

In this example we use two small sample datasets that contain sales data for cetain items. With the Versioning processor we will add new version data to the left input data set.

These are the sample datasets we will use.

In the example workflow we use two Custom Input Tables to insert the datasets. The table with the new version numbers is saved to a Result Table. 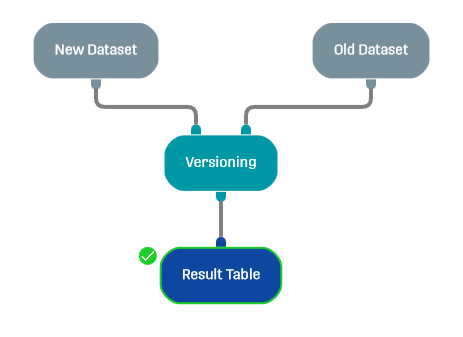 As result we get the new data table with updated "VERSION" and respective "TIMESTAMP" column.