This processors has been deleted, please refer to the processor Data Table Save or Result Table instead.

Filterable Result Table, or FRT in short, is one of the most interesting processors of ONE DATA.

FRT stores the input to a "queryable" storage for post-execution filtering and sorting.

The best part when working with Data is having interactive visualization reports: It can be very beneficial for the user to have dynamic charts that change with every single operation, such as grouping, filtering, sorting ...

FRTs not only allow to save data into "queryable" storage but also permits to create these dynamic reports.

FRT is a save processor, which means that it generally comes at the end of a workflow in order to visualize the result generated data (or data that is generated by a portion of the workflow).

The Configuration menu is the following: 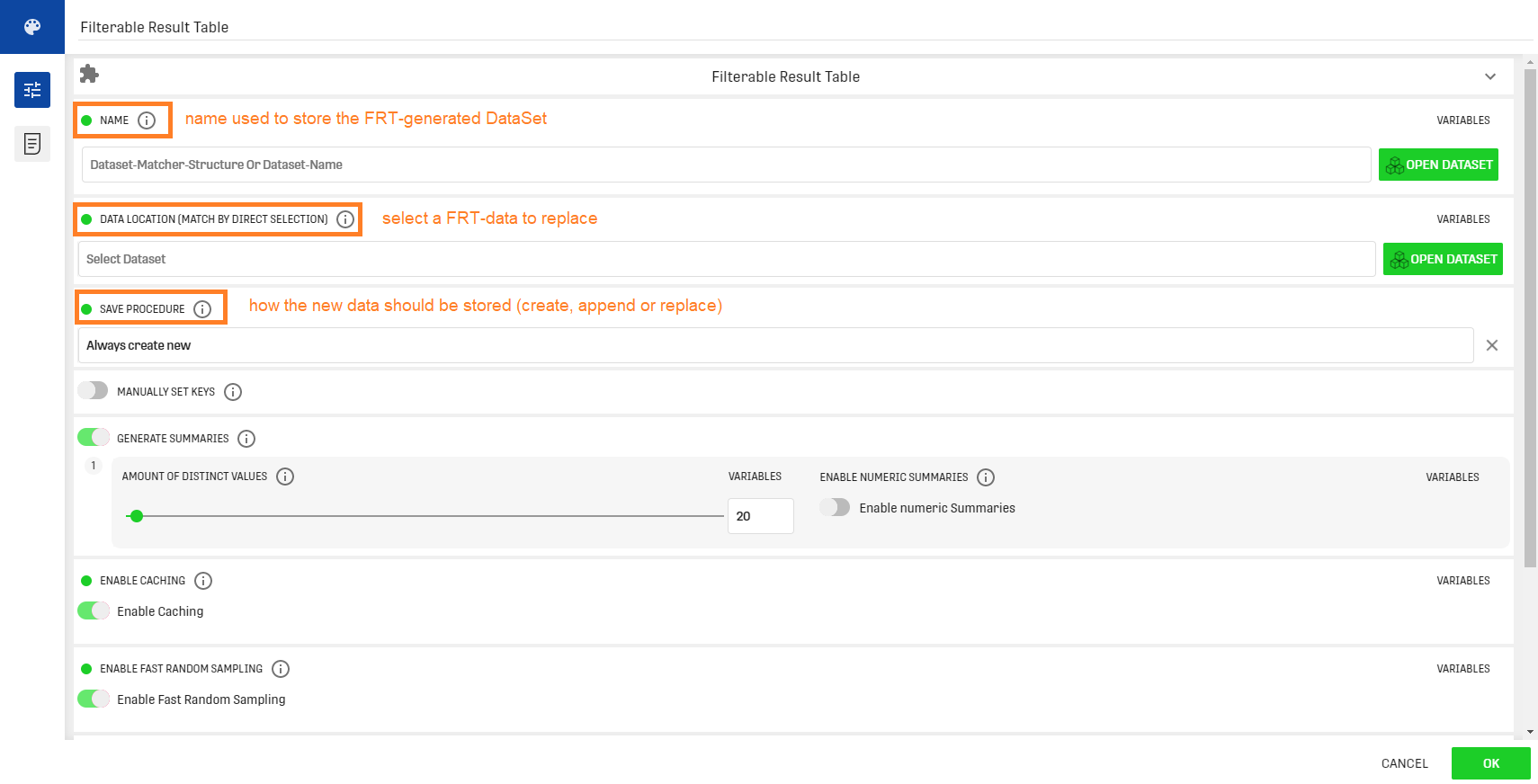 If both "Name" and "Data Location" are configured simultaneously (first two fields), an error will be generated

This processor contains multiple configuration fields (most are optional):

FRT has no output port because it usually acts as the last processor within a workflow, but it is able to generate a Dataset, after potentially applying some filtering on it, and save it.In addition, FRTs offer the possibility to download the generated table in CSV format.

The dataset preceding the processor, which can be altered by previous workflow stages, is displayed as a dynamic table on which multiple operations can be executed (Filtering, Sorting, Grouping ...).

The most interesting features of FRTs are related to reports.

The importance of FRTs is not only to provide dynamically filterable and sortable tables, but also to offer the opportunity to work with customisable reports in which user can configure different filtering options and monitor the changes in the displayed figures/charts.

For this purpose, FRT-generated reports are generally accompanied with Filter Containers that can be linked to the FRT-generated figures.

As the name indicates, a Filter Container is a configurable tool that can perform filtering operations on a selected column from a specific FRT figure or even from another Filter Container

=> This offers great control and dynamism for the report which signifies better Data analysis and exploitation.

Refer to the scenario below:

Even though the result can be achieved with a combination of some processors, nevertheless it is interesting what we can achieve with FRT alone because the resulting table is dynamic and can be customised.

What is also interesting in FRTs is the dynamic report that can be generated from the workflow:

As previously stated, this report can be dynamically changed in order to have better Data analysis.