The Venn Diagram Processor extracts information from a dataset and creates a new dataset that can be used for creating a venn diagram. 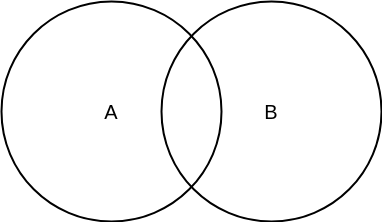 The processor requires a dataset suitable for a venn visualization. Usually these are columns that have common items and hence a cut set to visualize.
See the example below to get an impression of possible inputs.

Within the configuration, the columns, which will be used to calculate all information for a venn diagramm, can be selected. It is only allowed to select 2-5 columns. If no column is selected, all suitable (text) columns are used. These also need to be between 2 and 5, otherwise this processor does not work.

The Processor has two output ports.
The left one returns a dataset that contains the columns of the original input dataset and one additional column:

The number of rows of the dataset will correspond to the number of strings that are in all selected columns.

The right port delivers a dataset that contains columns named after the columns of the original input dataset and two additional columns:

In this example, we will create a venn diagram for the appearance of letters in words.

The input dataset contains a name in each column.

In the example workflow we use a Custom Input Table to generate our test dataset by hand. The results on the Venn Diagram Processor are saved to a Result Table. 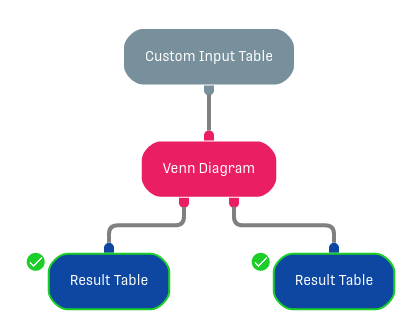 In the configuration we select all columns and for the report output name, the default value is used.

This output can be used to generate a venn diagram.

The following video shows how the result can be used to create a report with a respective diagram.

This is a snippet of the right output:

The value 5 in the "aggregated" column of the third row for example refers to SANDR (A is contained two times in the string and therefore not distinct).