The most basic workflow in order to read a CSV file with the Python Script Data Generator Processor (and afterwards persisting it as a data table in ONE DATA) is shown in the following figure, simply connecting the processor with a subsequent Data Table Save Processor: 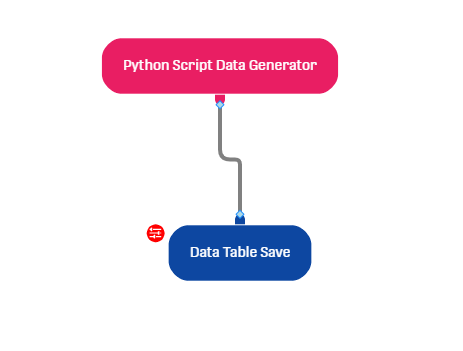 No further configuration of the python processor is necessary, other than writing down the python code to read the CSV file, alter it depending on your use case, and in the end supporting it as output of the processor.

The following code snippet shows an exemplary python code, which reads in classically structured CSV files from the file system. In the example, the CSV "test_python_read.csv" is read from the path "/sampleData/" (which needs to be whitelisted in both the ONE DATA Server container as well as the pydata container!). Its separator is configured to a comma ",".