Datatypes in ONE DATA Print

Data availability is an important asset in every ONE DATA project, yet what is also important is the type in which the data is stored. Understanding datatype specifications is a first step to every dataset creation procedure and can prevent overcomplications. Therefore, different datatypes cannot and should not be handled similarly.

ONE DATA Platform presents numerous datatypes, and in this article, we will present some of the major differences between them, as well as how to choose what best represents your data.

Before we dive into specific ONE DATA datatypes, it is best to have a general idea of the commonly used datatypes.

The following section explains the four fundamental levels of measurements used in our datatype definition: 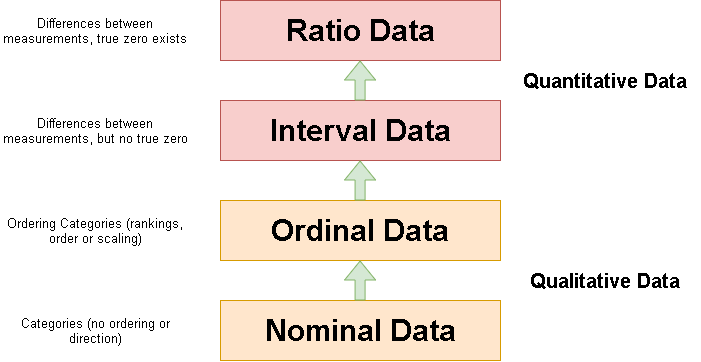 Datatypes in ONE DATA

Direct contact with datatypes in ONE DATA can be established in a number of resources, such as Data Tables where it can be visualized, and Workflows where it can be manipulated by some Processors.

The default value for a declared string is an empty string.

A string affecting a certain qualitative order to the dataset. Usually used for classification and labeling groups, and meant to be ordered and redundant.

A string affecting a description or labeling where the order doesn't matter. Sorting can be performed but is meaningless.

A numerical datatype representing discrete values. Operations to use are addition, subtraction and multiplications.

The default value for doubles is 0.

Examples include percentage representations where values can be close to each other and add up to a 100%.

Numeric variables cover more representational use cases but have less precision than doubles. The default value for doubles is 0.

Numeric intervals represent data where the the difference between values is the most interesting feature.

The numeric ratio covers all properties of a numeric interval plus a clear definition of the 0.0.

Numeric ordinals describe a set of numbers where the order counts but not the difference between values.

Numeric nominals are meant to give a digital description to certain variables.

Examples include price tags and any type of code.

Datetime variables represent both a date and a time variable allowing a certain specific operations using the Mathematical Timestamp Operation Processor. The representation form follows the default datetime value which is 1970-01-01 01:00:00 (YYYY-MM-DD HH:MM:SS).

The Custom Input Table Processor allows the user to set up a new customizable dataset/table with various options.

The Data Type Conversion Processor takes a given input and converts it, if possible, to the specified data type.

The Mathematical Operation MC (Multiple Column) Processor executes an arithmetic operation on the input columns and overwrites them with the result.

The Mathematical Operation SC (Single Column) Processor executes an arithmetic operation on the chosen input column and delivers the result in a new column.

The Mathematical Timestamp Operation  Processor adds or subtracts a user specified time value from one or several selected columns.

The Timestamp Difference  Processor calculates the difference between two datetime values (located in different columns of the same dataset) and returns the result in an additional column.